Skip to content
The Guides and Scouts District of Uusimaaadults, in english, new adultsThe best decision of my life: I started scouting at the age of 25
people

The best decision of my life: I started scouting at the age of 25

People often join scouts when they are children. However, Iiro Lehtiniemi, who is currently part of a local scout group Keravan Korvenpojat, as well as has positions of responsibility at the Uusimaa scouting region is a great example that you may join scouts during any time of your life and without previous experience! Iiro is not the only one who has started scouting as an adult. Every year around 1200 adults join scouts, and the statistics tell that there are almost the same number of adults involved as there are 7 to 9-year-old cubs. Coeval company may be thus found!

“I attended my first scout camp and gave my promise as a 25-year-old in summer 2013”, remembers Iiro Lehtiniemi, who started scouting in Kerava. “My friend asked from a bigger group of us, would someone like to come to help to a scout camp kitchen for one week with them. The schedules of my summer job allowed me to attend the camp and I wanted to go and experience a scout camp and take a closer look at the hobby. Even though I had not been in scouts earlier, I had some previous experiences about camping with my church group when I was younger”, Lehtiniemi continues. It is good to remember that you should always remember to ask your friends to join, at any age.

It is not always easy to blend in to a new group, but Iiro’s first experiences were only positive. “A new person in the bus seemed interesting and the adventurers and trackers at the back seat were creating their own interesting theories about who I was and where I was coming from”, laughs Iiro. “During the camp I got to know many of the leaders as well, and the welcoming was very positive. The newcomer was well accepted, and I was shown example and explained the background always when needed to be able to learn what was coming up and how things related.”

In scouts there are some own habits, words, and symbolism, which makes it important to familiarize the new adults. “Later on, I realized I probably should have taken the course Welcome to Scouting a bit earlier. In my case I was learning the basics as I went on. I would have also given me a bigger picture about what happens outside my own, local scout group”, wonders Iiro. “In the beginning it was challenging to realize all the possibilities. Also, the networks were missing back then, as I didn’t know about the wide world of scouting outside my local group. Accidentally I ended up being part of the camp committee of the regional camp of 2014, which led me to find out more about the scouting possibilities outside the local group.” Scouting is a hobby, where you can basically do almost anything, but it is challenging to articulate that to the newcomers. New adults should thus be offered different types of activities so that they have a possibility to experience the diversity that scouting has to offer.

Ideas for other scout groups

Iiro Lehtiniemi has now been a scout for five years. What kind of things affected the fact that scouting became Iiro’s number one hobby? “Great people, with whom I have done and experienced a whole variety of different things. Scouting has offered me a possibility to meet new people and get to try many new things. The longer I have done this and the better I realize all the possibilities involved, the more I find new projects and regular activities. For adults, scouting can also offer other things than leading a group weekly (which I also do for the fourth year in a row), such as educating yourself, educating others and trying different projects”, encourages Iiro.

What kind of recruiting tips does Iiro have for other local groups based on his own experiences? “Dare to ask people to join and contact them directly. Tell widely about the possibilities in scouting, as not everybody is directly into leading a group. However, once they have joined, there is a possibility that later they will also become group leaders. 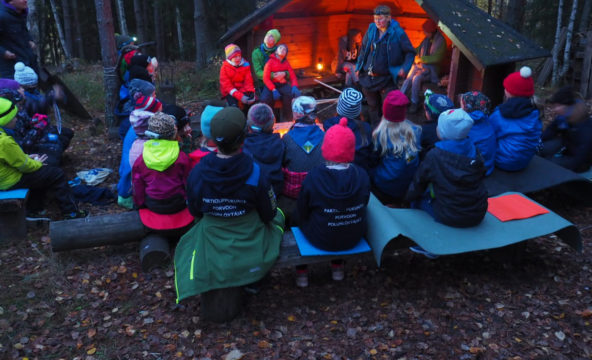 Local collaboration with Scouts and the church

Many - although not all - Finnish local Scout groups collaborate with…